The Navy jets roared across the Greater Houston area for a breathtaking 30-minute America Strong tribute to frontline workers. 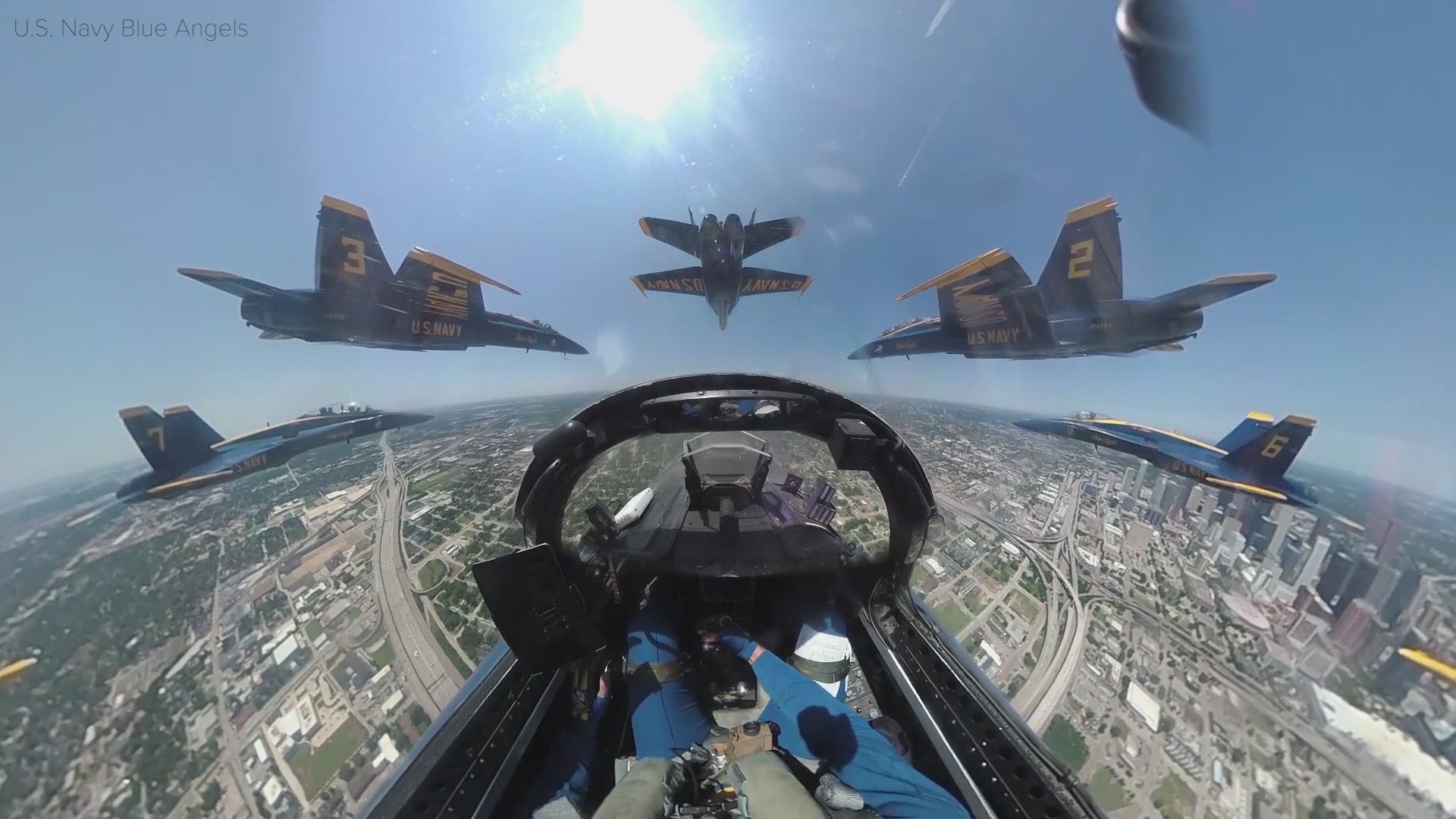 HOUSTON — Sunshine and clear blue skies provided the perfect backdrop as the Navy's Blue Angels roared across the Houston area for a beautiful  tribute to healthcare heroes and other frontline workers Wednesday.

They started in The Woodlands before heading south to Humble and Houston, west to Katy, Missouri City, Sugar Land and Cinco Ranch, then back to downtown and The Texas Medical Center. They ended their journey at Ellington Field.

If you missed them today, there's another chance on Sunday when another Houston flyover will feature vintage planes and other unique aircraft. It was originally scheduled for Friday but has been postponed because of weather. Scroll down for more information on that.

Hundreds of health care and hospital employees in the Medical Center watched the flyover. Doctors, nurses, administrative staff, and more looked to the skies as the Blue Angels made a roughly 90-second loop around the country's largest medical center.

"It’s amazing. I think it’s very nice. I’m just real happy that they actually think about doing it for us," said Denise Laird, a clinical coordinator in the UT Physicians EP Heart Complex Arrythmia Center. "It just gives me chills. That’s what America needs right now is respect for each other.”

"It’s really difficult to be the 'expert' but then have to say ‘I don’t know’ basically every day to every question that somebody asks about COVID-19," said Dr. Michael Chang, an infectious disease specialist and pediatrics professor at UT Physicians.

He said all hospital employees, not just those who wear scrubs, are helping to fight COVID-19. 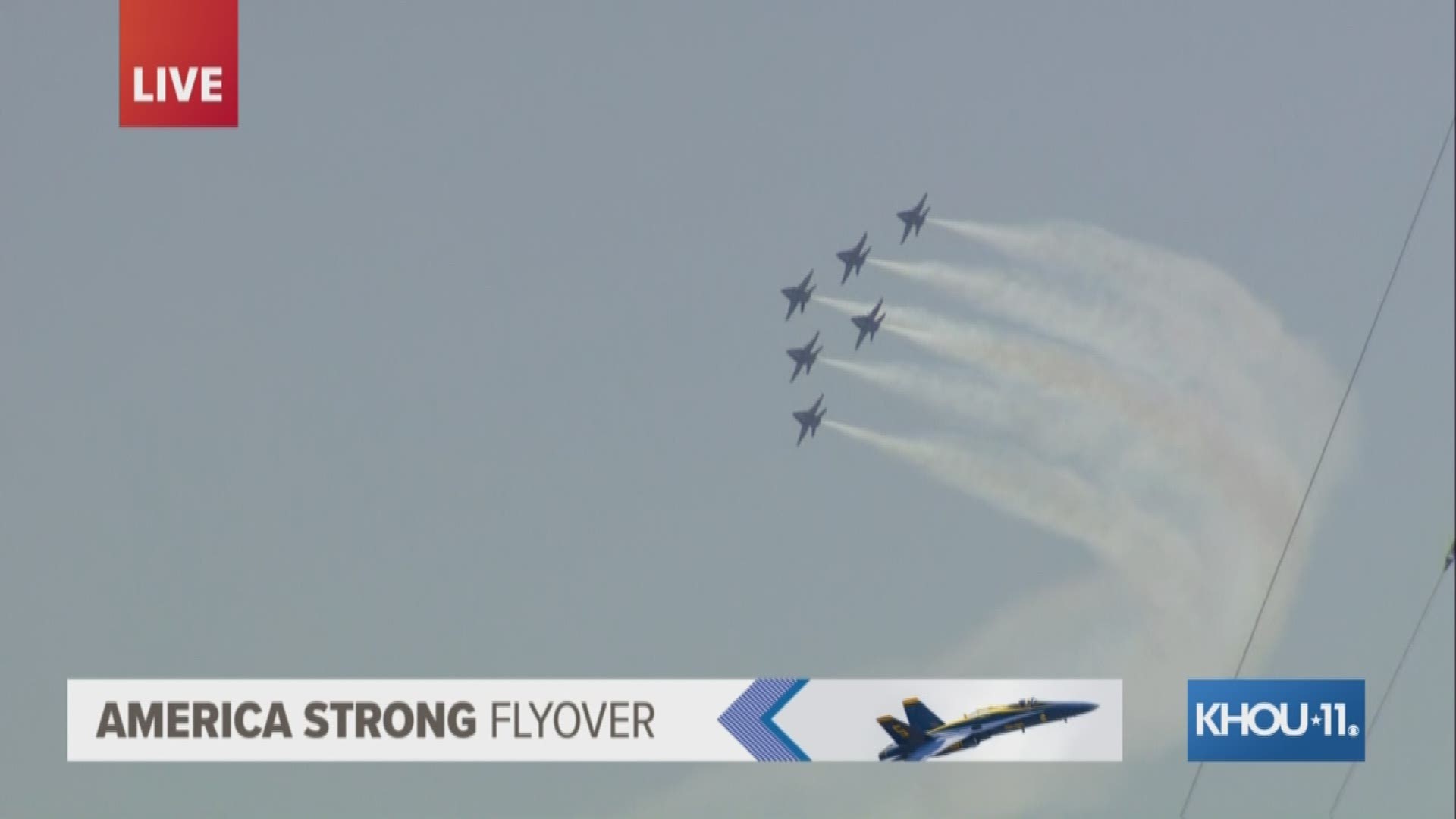 Check back for more videos soon!

RELATED: Here's what it looked like in the cockpit of the Blue Angels NYC flyover

Where did the Blue Angels fly?

The map shows the start of the flyover in The Woodlands, heading south and then following a path along the Eastex Freeway, over Humble and Kingwood through downtown Houston, over the Medical Center and then into southwest Houston and Sugar Land, Missouri City, heading up into the Katy and Cinco Ranch areas then east and north into Jersey Village and then southeast back over downtown and toward Ellington. It lasted about 30 minutes.

Tap here to enlarge the following map in a new window

Credit: US Navy
Blue Angels path over Houston May 6, 2020

The Blue Angels were right on schedule as they flew over the Dallas/Fort Worth area at 11 a.m. Wednesday.

RELATED: Watch: The Navy's Blue Angels fly over the Dallas-Fort Worth area 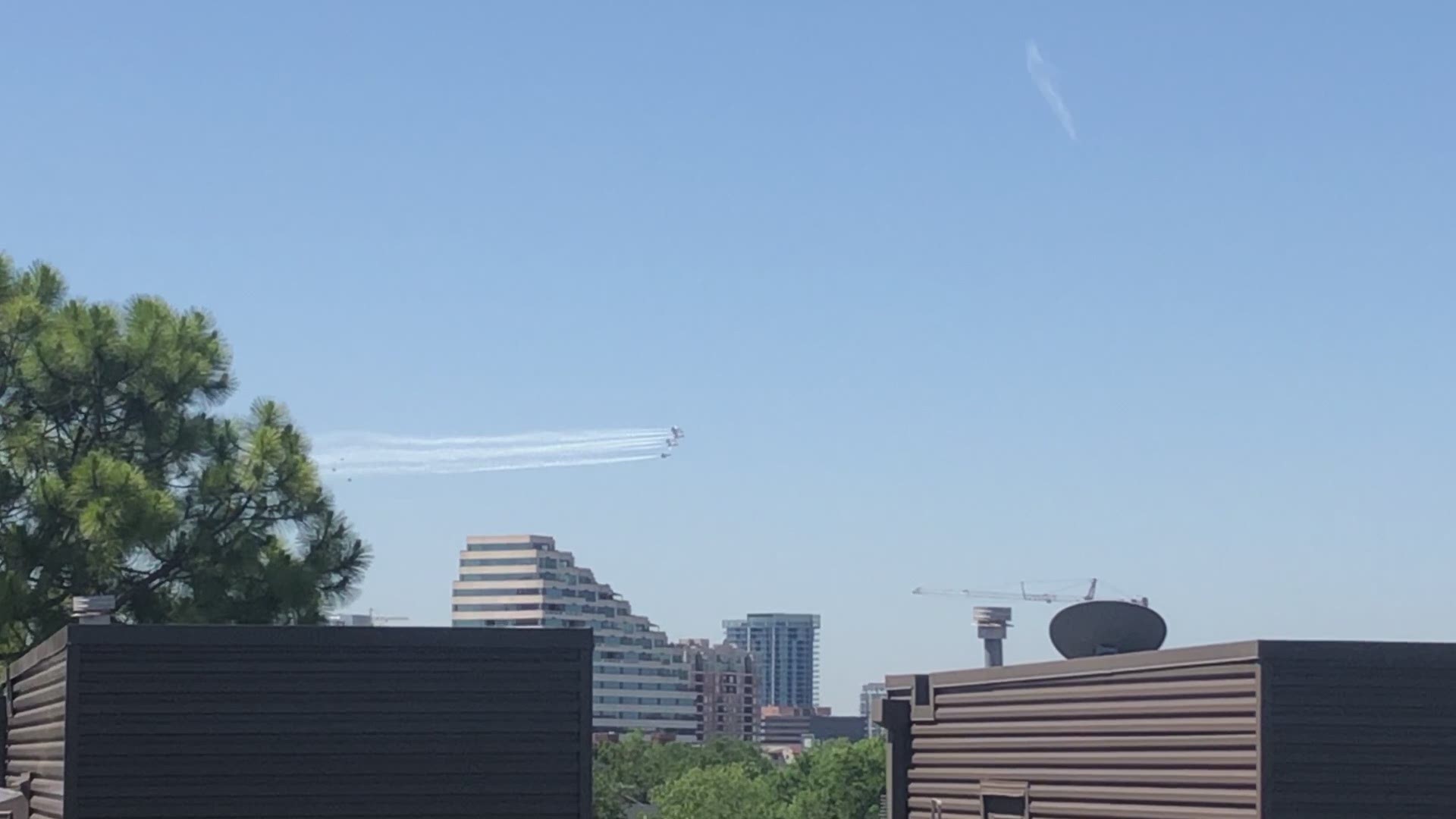 Take a look at this video released by the Navy this morning. It shows the Blue Angels taking off for New Orleans, DFW and Houston.

RELATED: One of the Blue Angel pilots is an Aggie and Kingwood High School graduate!

On Sunday, a collection of rare and vintage aircraft will also fly over parts of town. It was originally scheduled for Friday, but moved because of weather.