The mayor of Miami-Dade County said that three bodies have been pulled from the rubble of the Champlain Towers South, bringing the death toll to four. 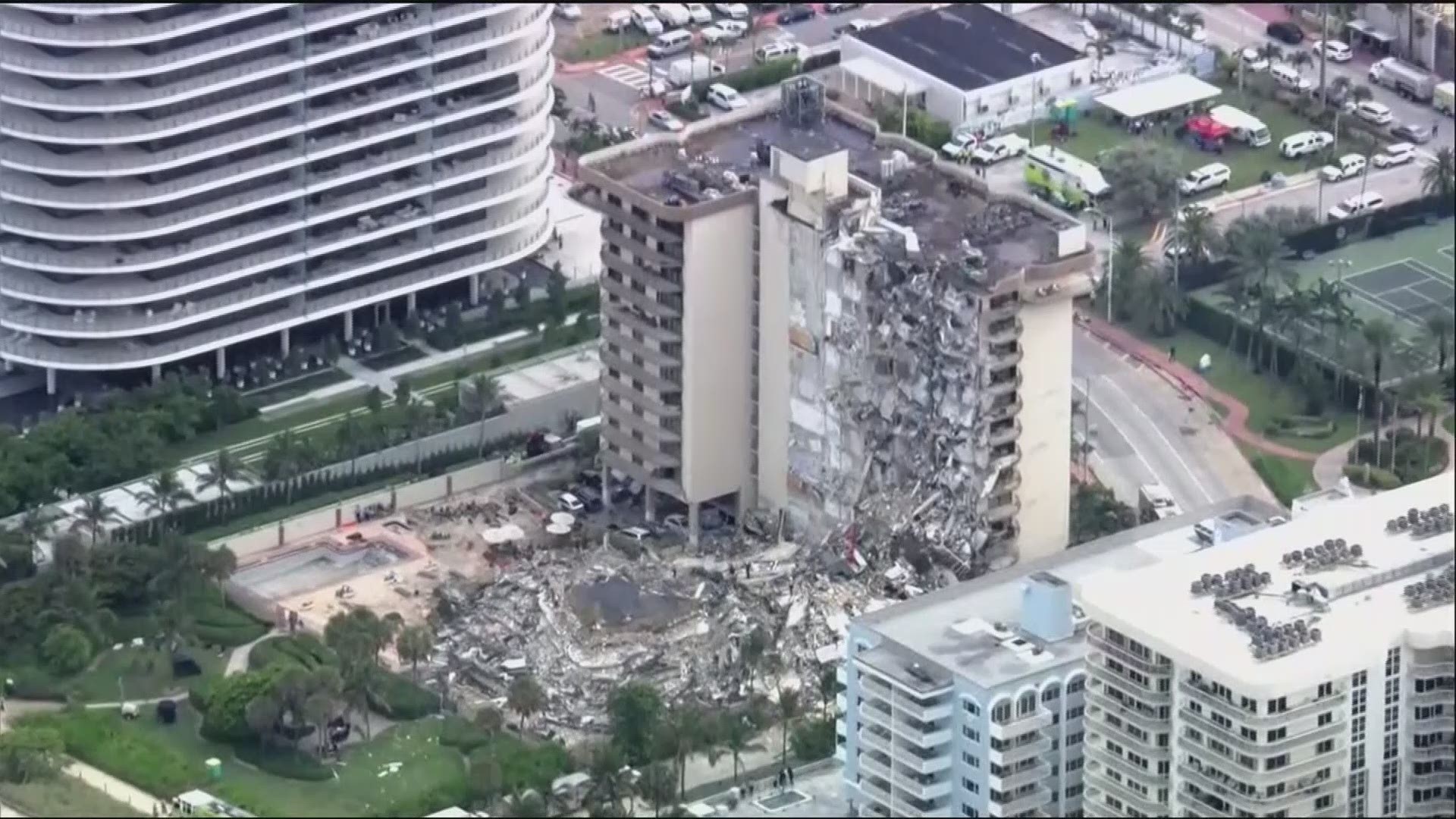 SURFSIDE, Fla — With nearly 160 people unaccounted for and at least four dead after a seaside condominium tower collapsed into a smoldering heap of twisted metal and concrete, rescuers used both heavy equipment and their own hands to comb through the wreckage on Friday in an increasingly desperate search for survivors.

As scores of firefighters in Surfside, just north of Miami, toiled to locate and reach anyone still alive in the remains of the 12-story Champlain Towers South, hopes rested on how quickly crews using dogs and microphones could complete their grim, yet delicate task.

“Any time that we hear a sound, we concentrate in that area,” Miami-Dade Assistant Fire Chief Raide Jadallah said. “It could be just steel twisting, it could be debris raining down, but not specifically sounds of tapping or sounds of a human voice.”

Buffeted by gusty winds and pelted by intermittent rain showers, two heavy cranes began removing debris from the pile using large claws in the morning, creating a din of crashing glass and metal as they picked up material and dumped it to the side. A smoky haze rose from the site.

Once the machines paused, firefighters wearing protective masks and carrying red buckets climbed atop the pile to remove smaller pieces by hand in hope of finding spots where people might be trapped. In a parking garage, rescuers in knee-deep water used power tools to cut into the building from below.

Surfside Mayor Charles Burkett said crews were doing everything possible to save as many people as they could.

“We do not have a resource problem, we have a luck problem,” he said.

The White House said President Joe Biden, who spoke with Florida Gov. Ron DeSantis after the collapse, was receiving updates from Homeland Security.

Officials said they still don’t know exactly how many residents or visitors were in the building when it fell, but they were trying to locate 159 people who were considered unaccounted for and may or may not have been there.

Flowers left in tribute decorated a fence near the tower, and people awaiting news about the search watched from a distance, hands clasped and hugging. Congregants prayed at a nearby synagogue where some members were among the missing.

On the beach near the collapsed structure, visitor Faydah Bushnaq of Sterling, Virginia, knelt and scratched “Pray for their souls” in the sand.

“We were supposed to be on vacation, but I have no motivation to have fun,” Bushnaq said. “It is the perfect time to say a prayer for them.”

"Debris is falling on them as they do their work. We have structural engineers on-site to ensure that they will not be injured, but they are proceeding because they are so motivated and they are taking extraordinary risk on the site every day,” she said.

With searchers using saws and jackhammers to look for pockets large enough to hold a person, Levine Cava said there was still reason to have hope.

Rachel Spiegel described her mother, 66-year-old Judy Spiegel, who was among the missing, as a loving grandmother known for chauffeuring her two granddaughters everywhere, advocating for Holocaust awareness and enjoying chocolate ice cream every night.

“I’m just praying for a miracle," Spiegel said. "We’re heartbroken that she was even in the building.”

Teenager Jonah Handler was rescued from the rubble hours after the collapse, but his mother, Stacie Fang, died. Relatives issued a statement expressing thanks “for the outpouring of sympathy, compassion and support we have received.”

“There are no words to describe the tragic loss of our beloved Stacie," it said.

Many people waited at a reunification center for results of DNA swabs that could help identify victims.

While officials said no cause for the collapse has been determined, DeSantis said a “definitive answer” was needed in a timely manner. Video showed the center of the building appearing to tumble down first, and a section nearest to the ocean teetering and coming down seconds later.

About half the building’s roughly 130 units were affected, and rescuers used cherry pickers and ladders to evacuate at least 35 people from the still-intact areas in the first hours after the collapse. Television video early Friday showed crews fighting flareups of fires on the rubble piles.

Computers, chairs, comforters and other personal belongings were evidence of shattered lives amid the wreckage of the Champlain, which was built in 1981 in Surfside, a small suburb north of Miami Beach. A child-size bunk bed perched precariously on a top floor, bent but intact and apparently inches from falling into the rubble.

Fernando Velasquez said his 66-year-old brother Julio, his sister-in-law Angela and their daughter Theresa, who was visiting from California, were in the building when it fell.

“I miss my brother very much. I talk to him almost every day,” said Velasquez, of Elmhurst, New York. “His call was always a welcoming call. But I know he’s in heaven, because he was in love with Christ. If he is gone, he is in a much better place.”

The missing include people from around the world.

Israeli media said the country’s consul general in Miami, Maor Elbaz, believed that 20 citizens of that country are missing. Another 22 people were unaccounted for from Argentina, Venezuela, Uruguay and Paraguay, where an aide said first lady Silvana de Abdo Benítez flew to Miami because her sister, brother-in-law, their three children and a nanny were among the missing.

Gilmer Moreira, press director for the government palace, said the wife of Paraguayan President Mario Abdo Benítez has “has already received official information about the search for her family” and was awaiting more details.