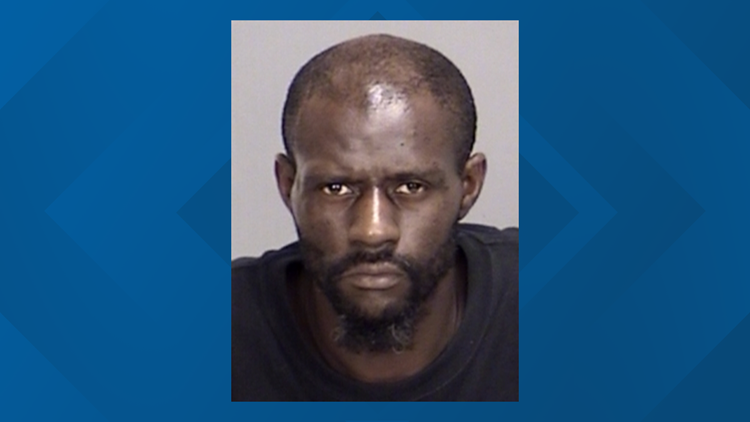 Photo by: BRAZOS CO. JAIL
Marquis Johnson, 38, of College Station, is charged with evading arrest, possession of a controlled substance and other drug charges. At last check, he was in the Brazos County Jail on a $12,000 bond.

BRYAN, Texas — Two people have been arrested after a short police chase ends in the discovery of drugs, according to court documents.

Johnson was driving down North Harvey Mitchell Parkway just before 1 a.m. Friday when witnesses said his vehicle was swerving onto the shoulder and across the roadway into other lanes, court documents stated.

Bryan police began following the car and the officer said Johnson drove the car off the roadway as he was going west on Leonard Road.  The car swerved from the left and right lanes and sometimes down the yellow line, the officer said.

The officer stated he attempted to make a traffic stop on Johnson's car, but he did not stop and continued traveling north, now on Richard Street.  The officer said he sounded his police siren in an effort to alert Johnson, but claimed Johnson continued to drive down several roads.  Johnson finally stopped in the 1000 block of Bittle Lane, police said.  When asked why he didn't stop, Johnson insisted his shoe was caught between the brake and the floorboard, according to court documents.

Johnson wasn't wearing any shoes, police said, and they never found any in the car.

Jazmon Druery, 30, is charged with possession of a controlled substance and possession of a dangerous drug. At last check, he was in the Brazos County Jail on $6,000 bond.
BRAZOS CO. JAIL

Druery was in the passenger seat of Johnson's car, police said, and told the officer he didn't know why Johnson didn't stop.  Police said Johnson allowed them to search his car and they found synthetic marijuana and prescription drugs not belonging to Johnson or Druery, according to court documents.

After searching the roadway of Leonard Drive and Bittle Lane, officers said they found a clear plastic bag with what was later found to be methamphetamine inside.  There were no other people or vehicles in the area at the time of the traffic stop, police said.